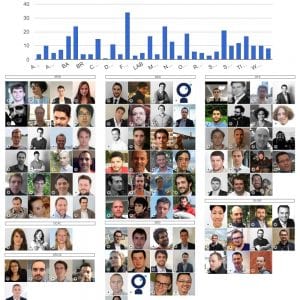 Ah, the old office directory: page after page, or screen after screen, of names and job titles. Wouldn’t it be great to have a virtual directory that displayed employees’ faces, included the company hierarchy, and grouped employees according to responsibilities and expertise? Better yet, what if that directory could be navigated by using natural hand gestures?

By combining the power of the Microsoft Kinect sensor and the Oculus Rift virtual reality (VR) headset, we have created just that – a VR company facebook that lets users traverse the company’s human resources and find the right employee with a flip of their hand.

Our Immersive Experience developers Muriel Caron and Vincent Guigui used BabylonJS, an open-source 3D/VR web framework, to display a VR representation of the company directory in which employees are grouped by expertise, skill, or interest. The resulting display is a floating image of the company’s workforce, as shown in the video below. The head-tracking capabilities of the Oculus Rift follows users as they look in any direction of the display, while the body-tracking technology of Kinect for Windows allows users to grab or release employee entries by moving their hand forward or backward.

“Mixing technologies which were not made to work together was a bit of a challenge,” says Vincent. “We had to devise solutions to properly track user movements using Kinect, feed them into a VR environment created using web technology (everything is running inside the Internet Explorer web browser), then display it inside the Oculus Rift headset. All with a very low latency, to reduce the motion sickness often encountered during VR experiences.” Challenging to be sure, but the OCTO team succeeded in creating an immersive world that feels real and where the movement and position of objects seem consistent with the user’s point of view and actions.

Moreover, Vincent sees this as just one example of the many ways that we can use VR in productivity applications. “VR will unleash productivity,” he predicts, “freeing users from the limitations of common displays and interfaces, letting them focus solely on the information and the objects they want to interact with. Think of an employee having any number of virtual screens floating above her desk, or even following her while she moves from one room to another. Those virtual screens could be any size or shape and have dynamic opacity ».

OCTO is proud to let you know that our team is already working on these future immersive experiences, using mixed-reality devices like HoloLens to break or bridge the boundaries between realities, allowing physical and digital entities to coexist and interact.

This article was originally posted on Microsoft Kinect for Windows blog