This article aims at showing how we can centralize logs from a Docker application in a database where we can then query them.

This article is built around an example where our application consists of an nginx instance, an Elasticsearch database, and Kibana to render beautiful graphs and diagrams. The code of the example is available on github.

We need to collect and transport our logs as a data flow from a distributed system to a centralized remote location. That way, we can get an aggregate vision of the system in near real time.

We need a tool to extract the logs from the Docker container and push them in Elasticsearch. In order to do that, we can choose between several tools like Logstash or Fluentd.

Logstash is built by Elastic and is well integrated with Elasticsearch and Kibana. It has lots of plugins. Fluentd describes itself as an open source data collector for unified logging layer. Docker provides a driver to push logs directly into Fluentd. Fluentd also has a lot of plugins like one to connect to Elasticsearch.

I’ve chosen Fluentd because Docker pushes it, and Kubernetes (an important Docker project) uses it. Furthermore, in our example, Fluentd Elasticsearch’s plugin plays well with Kibana.

We can use two types of infrastructure: either a classic architecture with servers or a cloud-based one. I’ve chosen the classic one for simplicity’s sake.

Therefore two servers are needed, one for our application and Fluentd, and one for our Elasticsearch database and Kibana.

The process can be described in 6 steps

As the application is a simple nginx, I’ve packaged a new image since the official one uses a custom logger that is not appropriate for our purpose. We can run the app using Docker-compose up with the following Configuration

Fluentd is a middleware to collect logs which flow through steps and are identified with tags. Here is a simple configuration with two steps to receive logs through HTTP and print them to stdout:

In this sample, each step defines how the data is processed:

The data is streamed through Fluentd. Each chunk of data is tagged with a label which is used to route the data between the different steps.

In the previous example, the tag is specified after the key match : app.access. The tag of the incoming data is the URL of the request. For example running curl http://localhost:8888/myapp.access?json={"event":"data"} outputs {"event":"data"} to stdout.

This slideshare explains the basics of Fluentd.

Each step is a plugin. There are more than 150 plugins divided into 6 categories. The most important ones are:

Docker pushes its logs to Fluentd

First of all, the Fluentd agent can run anywhere, but for simplicity’s sake we run it on the same node as the application. The official image can be found on the Docker hub.

We need to configure the Fluentd agent :

The default logging format option for Docker is json-file. We can use the log-driver option to specify Fluentd. By default it connects to localhost on the 24224 port.

Right now, our system is useless. We need to send logs to a distant database, Elasticsearch.

Fluentd needs the fluent-plugin-elasticsearch in order to send data to Elasticsearch. I have packaged the image here

We need to update the Fluentd agent configuration

Don’t forget to change the hosts to point to the Elasticsearch instance.

The logstash_format true configuration is meant to write data into ElasticSearch in a Logstash compliant format, hence allowing the leveraging of Kibana.

We can run Fluentd with:

Then we can run the application and query it with our favorite browser to fetch some lines form Elasticsearch in the Logstash index. Since Fluentd buffers the data before sending them in batches, we might have to wait a minute or two.

Unfortunately, only the Docker metadata are sent (like the Docker name, label, id…) but the log field contains the raw log lines of nginx and it is not structured. For example, we cannot query all failed HTTP requests (status code >= 400)

Fluentd needs the fluent-plugin-parser in order to format a specific field a second time. I have packaged the image with it here

We need to update the configuration :

The second block of configuration :

Here we use the tag concept to route the data through the correct steps: 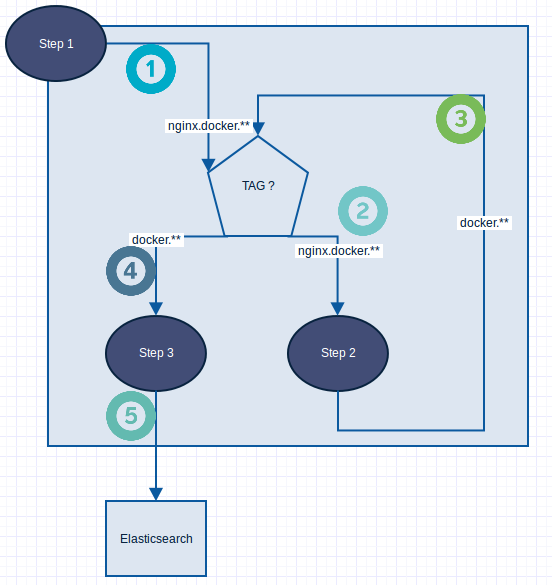 Here is the structured data we can now used to create diagrams :

We can then run the application and query it with our favorite browser to see the data correctly formatted in Kibana.

Our system collects logs from our application and send them to Elasticsearch. The Docker engine requires to have Fluentd up and running to start our container.

Even if Fluentd dies, our containers using Fluentd continues to work properly. Furthermore, if Fluentd stops for short periods of time, we do not lose any piece of log because the Docker engine buffers unsent messages, so that they can be sent later when Fluentd is back online.

Finally, since Docker 1.9 we can show labels and environment variables with the logging driver of Docker. In our example, we added: service: nginx and it shows up in Kibana.

We are now able to create graphs such as this one: 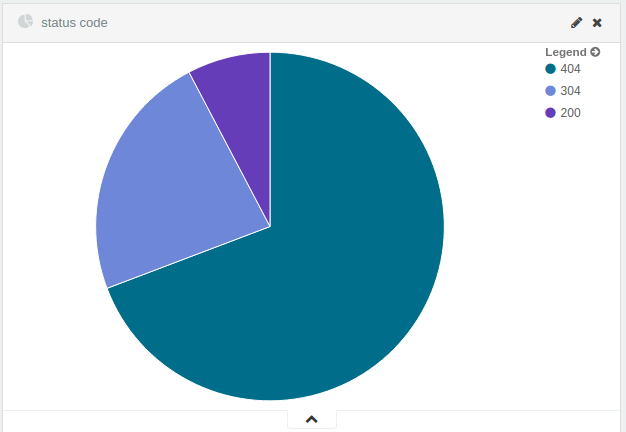 So far, we have seen how to collect and structure logs from Docker to push them in Elasticsearch. We can easily change the Elasticsearch plugin to the Mongo or HDFS plugin and push logs to the database of our choice. We can also add an alerting system like Zabbix

We can add nodes to our infrastructure and add several containers in one node. Keep in mind that this article doesn’t cover everything. For instance we have not answered the following questions :

Run everything in two commands with the Ansible scripted repository